It's just me and my Baby.....And some Cameras Eye.

I Couldn't have had a better time.

MVP: Paul Daly. He rocked two sets. Worked the door for four hours, and provide the bass rig beyond the call of duty.

One would think that I'd give this award to Chris, who also played in two bands, took care of the recording, and put up with my obsession about it all. But he doesn't care......

Actually he cares a great deal, and TEDSTOCK would never have happened without him. So Chris gets the MP3 award.

So when is the live show going to be released...

I saw the Four Fellows on the AVC site, Those guys rock! I'll be their parents are beeming with pride.

I'm glad the show was a success, Happy Tedstock.

The Noodle was indeed awesome, as was Paul's bass rig, as was Chris's keys for MDot, as was everything else. Sickness kept me from making a real night of it, but I enjoyed what I saw. I will spend the rest of the day thinking up names of awards that everyone deserves.

At this point, I know that George wins Miss Congeniality in a landslide.

Dateline Paramus NJ - I just woke up an hour ago and went to take care of the morning business in the bathroom when I suddenly relized that much to my dismay my ass was missing! I leaned against the sink and tried to recollect what might have become of my rather large posterior... "Oh yeah! It must have been rocked off last night at Tedstock...", I said out loud.

What a weekend of surprises it was. I was let in on a deep dark secret about our dear friend Hue B. Mooksuki. Turns out that he's a operative with the CIA investigating rogue counter insurgancy groups wandering the great white north (don't worry Hue, your secret is safe with us).

The day started with the droogies of Williamsburg's rock scene crawling out of their back ally ways and various holes in the street hauling their gear over to the Trashbar on strikingly beautifully warm and sunny Sunday. It would appear that this kind of thing is common in Williamsburg since the sight of a constant line of guys hauling amplifiers down the street seemed to turn no heads.

Along with Jackson's longtime drop dead gorgous girlfriend, Jackson's entire family were all present and accounted for at the event including the most distinguished Gen. (ret) Robert Wilson and his most lovely wife Peggy. It was great seeing them. They haven't changed a bit since I was last in their company (doing laundry over at their house while failing out of the University Of Maryland). I was discussing Army football with Peggy attempting at one point to convince her that Bobby Ross was the right man for the coaching job to which she said, "Pat, your wrong about this as you are with other things...". (My wife told me on the way home, "That Peg Wilson... She's a hoot!" Couldn't have said it better myself). She had obvously been talking to my sometime Savage Distortion nemesis Clarke. Turns out Clarke is not some scraggly longhaired Smoke & Mirrors rock god, but a stunningly pretty young lady. She was probably being nice to me lastnight since Mrs. Alva was with me, otherwise I'm sure she would have roundhouse kicked me in the jaw.

Back to the rocking and associtated loss of ass... With out question the Tedstock lineup could hit the road and take the country by storm (what's an Ozzfest?). The Four Fellas opened things up and blew us all away. They invited the man of the hour up to be the honored "Fifth Fella" for their an chore. They left us with our jaws hanging and wanting more.

I can't recall the exact order of play since the bartender was overserving me with zeal, but I think Geek Farm were next up. I'd heard an awful lot about these guys and they did not dissapoint. Jackson again was asked to lend a hand during a smoking rendition of "Hungry Like a Wolf". Following a dreamy set by Lost Patrol, I think it was Via Skyways turn. This is a Hope Street supergroup made up of the finest associates of the Smoke & Mirrors kibbutz. They tore through their Pink Floyd inspired set with reckless abandon. That Rob Macold(sp?) guy... The man is most dangerous on that drum kit. Following the set, the guys huddled and quickly realized they could never top that performance and quickly broke up the band. Selfishly, the upside was that this meant we got to see Microdot perform. I've heard a number a tracks from these guys during my bungie trips to S&M over the years and have always been a fan. Seeing them is an experience that can only be discribed as an awakening. If anybody out there gets an opportunity to see this band you must. Haven't heard three guys sound this good since "Moving Pictures" was released. I now know why Jackson and Chrispy look forward so much to these guys coming into record.

Next up, The Horse You Rode In On. It's hard to discribe this band. In my hometown Atlanta, there was a band known as Col. Bruce Hampton and The Aquarium Rescues Unit. About as close as I can get to an asimilation. The room filled quickly once these guys took the stage. It was a brilliant performance from beginning to end. Afterwards I asked Lance if they were doing any other shows in the near future to which he commented, "Naw man, we haven't really played as band for years, we just put it together for Tedstock". Jackson is a lucky man. I don't think I've ever recieved a bithday gift as cool as that before in my life. Not only is this band great, Lance and Co. are clearly class acts. They MUST find a way to put something together on some kind of regular basis. To deprive us of their music is cruel and inhuman punishment.

It begins to blur a little more at this point but I think it was Rock & Roll Noodle up next. Jackson, Chrispy, Rob, Paul, guest keys by Annie. Only one thing I can say... There are many in the country of Chile that are extremely envious of all of us who were there. Jackson was in peak form. He is a rock god. Pricess Leia is a masterpiece.

Once you thought there was nothing that could top all this, The X's took the stage. This band is fronted by an old highschool friend of Jackson's that I caught last time I was with Jackson in NYC this summer. If these guys don't have a record deal by the end of this month there is something seriously wrong with this world.

The music was indeed a highlight, but the part I enjoyed most and am most thankful to Jackson for was simply being able to hang out with all you guys for the night. I haven't had so much fun in a long time. Find a reason to have another one soon.

Lastly, I'm begging you all, pleading with you all, on my hands and knees, PLEASE put together a website to link these bands and music together so we fans of the Smoke & Mirrors movement can easily get our grubby hands on it all.

Jackson, you did remember your present didn't you?

Does Betty Ford do outpatient deals?

It was a great time last night. Simply a great party with old and new friends and great music. And Ted.

Aw shucks Tony Alva. Thank you for your very generous assessment. It was nice for me to be able to match a kind face with your provacative repartee. As a very drunk patron once eloquently remarked, "I argue to learn." Please bear in mind that I'm 3 or 4 times more likely to pipe in when I disagree, as opposed to when I agree... which I often do.

As for Tedstock - I wisht I could've been there earlier and stayed later, but alas, the traffic, the hangover and the prospect of another hangover interfered with my best interests. What I saw was sensational. Thumbnail Moon still makes me swoon. On the subject of Thumbnail Moon, a severely intoxicated Kevin Lacey covertly whispered to me that he thinks Ted is a genius. I'll have to agree. Asshole that I am, I stepped out for a slice of pizza towards the end of the Microdot set and missed their Left of the Dial cover which Ted will not let me forget. It was really good pizza, but not that good. Guess I'll have to get it on CD. The Horse was wildly entertaining as usual, especially Monkey Love and that Alice song, which is like tripping but only for 6 or 7 minutes. And to borrow a phrase from Paris Hilton, the Xs "were hot."

Thanks for a great time Ted. You pulled it off something fierce.

Thank you Clarkie, and my thanks to Kevin for the kind words, but I know how drunk he was. 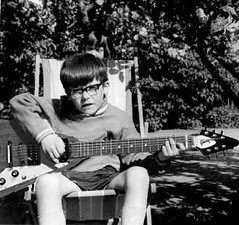